On the Decline of Rural Life: An Empty Schoolhouse

A little over a year ago, I was taking a hog to the butcher with my family, when we decided to stop and spend some time in prayer at a Catholic Church in a Southern Kansas small town. Afterwards, we spent a bit of time walking the Church property. What I read on the cornerstone of the school surprised me: A.D. 1952. I knew for a fact that the same small Catholic school had closed only two decades later, along with the public schools in this town, as the population dwindled and school consolidations began in haste. The date is shocking because it tells the same old story, replicated in almost every other small town in America: a sudden and precipitous depopulation of towns that only a few years before were building for a bright future.

It leaves one questioning what factors cause such a calamitous change in such a short time. No single reason could possibly explain such a drastic change. How could a town, building for the future, suddenly have an empty schoolhouse? The factors of this decline are legion, but some have played a greater part than others. In my coming essays I will examine each of the factors individually, but for this one I’d like to focus on the effects of those changes. I believe that by looking at the current state of rural life in America we will be better able to point to its causes.

I write from the unique position as someone who was the “last” of many things in a small town in rural Kansas. I was one of the last classes in our small Catholic school before it closed. I was on the last T-ball team our town could support before consolidating with the closest larger town. I was alive to see that last store in our town close after opening in the early 1900s. My brother and I were best friends because our nearest friends were a mile or more away, and there were not many of them. We envied our friends in the larger town up the road who had friends in town. Today, even the larger towns have fewer and fewer children. The public high school has half the student population today than it did a little over a decade ago when I graduated.

A few years ago I had the opportunity to move back home and to farm just up the road from where I grew up. We knew when we moved that it would prove difficult to live there, but we couldn’t pass up the opportunity. Our landlord was also a son of the town, but he was fifty years my senior. He had moved away as a teenager and purchased his home place after retirement. We lived in that home during our three years there, and I had the opportunity to listen and to learn how things were back when he grew up in the fifties. He told us about Sunday gatherings and football on their front lawn; old pickup trucks lined the road and conversations lingered into the evenings. The thing that struck him most was how the community that he knew growing up had completely disappeared, and how communal morality vanished along with it (as the influence of the Church waned, both eroded).

My own experience of moving back home forced me to confront the reality that the home I loved was fading away. More and more people had chosen to leave the land and seek out economic prosperity far from it. And maybe that is the starting point for understanding what has happened to rural life—not just to my hometown, but across the globe.

If you are reading this it is because somehow or another you have come across the idea of an economic way called “Distributism.” Among other things, what Distributism proposes is a return to the countryside as the way of the future. Rural America was once very distributist with its locally owned mills and trades of all kinds. A healthy countryside supplied all the needs of the local urban populations. Farmers with small holdings fed not only their families, but also often made a good living for themselves in an independent way of life that is now completely lost. As Industrialization took hold of the rural countryside, the family farm became a way of the past.

Yet as my heart aches for the reality of a dying countryside, a fire burns in the hearth of my heart. I am no longer the hapless dreamer that I once was (with regard to life on the land). My vision of straight weedless rows of crops was burned up in the southern Kansas wind. Farming is not for dreamers or for the weak of heart. It is for determined men willing to make a life of penance on the land their own. If we are to begin to restore the countryside and fill it with family farmers, we must first look at all of the many causes of its decline. This will allow us to be able to form our farms and homes in such a way as to offer a legitimate alternative to the industrial model, and to begin to rebuild rural life one family farm at a time. 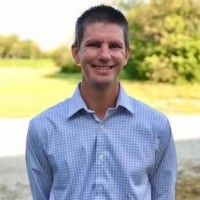 Kevin Ford
Kevin Ford is married to his wife Mary, and they have three young children and one on the way. He and his family currently reside near Topeka, Kansas. Kevin is a diversified farmer with a degree in Theology from Benedictine College, and he actively promotes The New Catholic Land Movement and the benefits of rural life for Catholic family and culture.

“a life of penance.”
so well-put!
thank you for your article.

I feel like returning to our rural roots are almost impossible. Especially for Catholics. I would support starting more missions down here in South Carolina