One trait that the Catholic Workers share with most everybody else is that they often quote G.K. Chesterton. But what sets them apart is that they also take his ideas on Distributism seriously.

As Mark and Louise Zwick show in their book on the Catholic Worker Movement, Peter Maurin and Dorothy Day founded the work in 1933, realizing that with unemployment reaching 25 percent “there had to be an alternative to the economic system that had left the social order in such disarray.” In tracing the rise of capitalism, the Zwicks argue that there is a connection between the Calvinistic doctrine of predestination and the deterministic “invisible hand of the market” that gave justification to the idea that being poor is just your own fault. Although it didn’t stop capitalists from working hard to get rich, it strangely prevented them from being charitable to the poor since the scheme of salvation downplayed good works. This mentality has served to create quite a distance between the rich and the poor in America. The solution to the problem involves not only a devotion to the works of mercy, but helping the poor become self-sufficient. Distributists are the only social theorists who seem to understand this. Economics must not be more important than people. “Profits do not have rights, but workers do.” Conversely, the opposite danger from the spread of cancerous corporations is the gargantuan growth of government. In The Catholic Worker paper Dorothy Day tried “to awaken our readers to the necessity of combating the ‘all-encroaching state.’”

The only way to combat both the forces of big business and big government is with a society of owners, families who own their own property, workers who own their own businesses. Worker ownership is not only more respectful of the dignity of the person, but it produces goods of greater quality.

In spite of the connection between Calvinism and Capitalism, the Distributist solution is not something that must be explained only to Protestants. Most Catholics, especially in America, don’t get it either. They have bought into Capitalism. In 1948 Dorothy Day wrote in the Catholic Worker:

If the priesthood studied distributism as a long-term movement and did not play two ends against the middle by endorsing the present capitalistic system, we would be ready for what the future would bring.

This is prophetic. If a Distributist solution had been embraced in large numbers, starting with Catholics in the transitional years following World War II, we could have prevented “the military-industrial complex” that developed instead, with huge corporations serving as government contractors and lobbying for more and more military buildup with the bureaucratic buildup that inevitably accompanies it. In order for the big corporations to compete for the huge contracts they would need cheap labor, cheap parts. The result was low wages, outsourcing, loss of domestic manufacturing, loss of jobs. America does not make anything anymore. It just orders it. Wage slaves live in stacks. Ownership is only a vague dream.

Dorothy Day often quoted Chesterton and praised him as much: “To us who daily suffer the ugly reality of industrial capitalism and its fruits, the… words of Chesterton ring strong.” She also invoked St. Thomas Aquinas as a defender of property, that “a certain amount of goods was necessary to lead a good life.” In other words, that property had to do with what was proper or appropriate to a man.

What prevents the proper distribution of property are “structures of sin.” What is going to change these structures of sin is going to have to be something both physical and spiritual. It is not going to happen merely by materialistic means. It is not going to be forced onto a populace from above. It must come from conversion, from a change of heart, from people themselves who not only care about their families, but about their neighbors’ families.

Dorothy did not only write about Distributism, she did Distributism. She helped people become self-sufficient. She started farms. She focused on the wonder of everyday life. She did things for herself rather than hiring others to do them. While she admitted that Distributism had an agrarian emphasis, she said that does not mean that everyone must become a farmer. There must also be an urban emphasis on widespread ownership and self-sufficiency. “We are not going to leave the city to the Communists.” 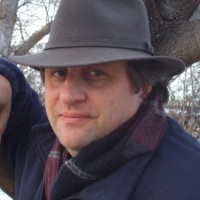 Great article, and good discussion too. Thanks especially, Fr S, for raising the question “How do we get there from here?” I wonder if the way to get to our goal of a distributist society might be to have a few people quietly live individual distributist lives, bartering with each other, setting up little collectives or co-ops that become nuclei of gradual, localized, small-scale, neighbourhood-level social change. The open-source movement in software started in rather this spirit, with a few people helping each other to do what they knew was right, and eventually attracting others to their community, until open-source Linux emerged as a force in the world’s computer industry. The Catholic Workers have a good turn of phrase for this gradualist approach, speaking not of revolution and overthrow but more modestly of “building a new society in the shell of the old”. It has in the same spirit been wisely said that all politics is local. And our Lord, or as I rather like to say these days the Rabbi Yeshua ben Josef (we need to Hebraize our Church, to make it more Jewish and less triumphalist) is said to have used a metaphor of leaven in dough, which has perhaps some application to Fr S.’s problem among other problems in life: a lively little scrap of yeast eventually, the Rabbi is said to have said, causes a whole huge soggy, mass of water and flour to rise.

Distributism is more about what government must stop doing instead of what government should be doing. For example, Corporations, at least in their current form, are creatures of the State. Without massive legal privilege, these huge, centralized controlled Corporations, would wither away.

I certainly cannot speak for all clerics, but I think that my hesitancy to accept distributism is simply that it leaves several questions unanswered. (To be fair, I also have to say that my academic background before the priesthood is in Austrian economics.) This is not in any way to be taken as a support of what we have now. How is it that we can impose distributism and not violate the moral law? It would be understandable if it were choice made by all, but how can that happen? I know that these are questions that distributists have tried to provide answers to. I know that their answers are reasonable. I simply do not, as a priest, find them convincing. I wholeheartedly agree with Rerum novarum and subsequent teaching. The question that seems insurmountable is getting to the distributist solution without willfully choosing evil, i.e., theft and coercion.

Father S., Distributists do not advocate theft, and the only way you can consider it coercion is if making the civil law match the moral law is also coercion. If that is the case, if – as you suggest – we can only do this if it is the choice made by *all*, then we can have no law at all because we would be coercing those who do not willingly comply. Are we then to allow fraud simply because not all agree that it is wrong? That would be nonsense. Therefore, we advocate convincing enough people of the wisdom of Distributism so that the laws can get changed and establish economic justice and limit government to its proper role in society. In my understanding that does not equate to either theft or coercion.

Great article. As for why more Catholics and especially more clergy don’t stump for Distributism, I think it is partially because many Catholics have never heard of Distributism, and even if they did many would find it too radical. This is especially true for the clergy who have to avoid upsetting donors or their parishioners.

To give an example from my own experience, a Catholic parish in a wealthy suburb close to me almost lost a huge number of parishioners when the pastor wanted to use the parish grounds to host a soup kitchen for the homeless one night a week. Needless to say, the offending pastor was moved to a different parish and replaced with a different priest.

I imagine there are large numbers of Catholics, especially in the United States, who would consider Dorothy Day and the Catholic Workers a bunch of crypto-communists simply because they discuss social justice. It is surprising how many Catholics and Christians of all denominations have been taught to recoil at any critique of capitalism whatsoever.

John, I fear that you are right. I do believe, however, that the Church is moving back toward fearlessly preaching all aspects of the Faith and accepting the consequences of doing so. Maybe “lurching” is a more accurate description.

Simple question: what is the difference between Augustinian predestination and the Calvinistic kind that came later?

Wonderful article. She is truly a great inspiration for both the distributists and the anarchists movement.