These are the words of G.K. Chesterton, aimed at eugenicists following his successful campaign to defeat the “Feeble-Minded Control Bill,” the 1912 proposed legislation to confine and sterilize mental or “moral defectives” for “the improvement of the British breed.”1 William Inge, the Anglican Dean of St. Paul’s Cathedral publicly rebuked the English writer saying that only “irrationalist prophets like Mr. Chesterton” could resist the “logic” of eugenics.2 Chesterton’s so-called attack on reason would be justified if only his defense of the weakest and most vulnerable wasn’t so reasonable and logical.

By terminating the reproductive capabilities of these “undesirables,” eugenicists believed they could reduce or completely eliminate negative traits from spoiling future generations. They would do so by wielding the power of the State to sterilize and confine anyone they deemed degenerate and unworthy of procreating. This “scientifically organized State” intentionally wrestling with the “old culture of Christendom” by means of the cleansing of society of undesirables, served as fodder for Chesterton’s 1922 book Eugenics and Other Evils:

While contemporaries of Chesterton, like eugenicist George Bernard Shaw, supported the use of deadly chambers for eradicating the disabled and unfit,3 most “enlightened” eugenicists attracted supporters by appealing to language that appeared humane and valuable to science and progress. Caring for the “feeble-minded” sounds benevolent and compassionate. But Chesterton understood exactly what they meant by “feeble-minded.” They meant the “lower classes.” They meant “humanity minus ourselves.”4 And when they spoke of enriching humanity, they meant something else entirely:

They mean that the public is to be given up, not as a heathen land for conversion, but simply as a pabulum for experiment…. They do not know what they want, except that they want your soul and body and mine in order to find out…. All other established Churches have been based on somebody having found the truth. This is the first Church that was ever based on not having found it.5

Eight years after Chesterton published his book, Pope Pius XI issued the encyclical Casti Connubii and pointed a finger at the unrelenting eugenicist movement, that “by public authority wish to prevent from marrying all those whom, even though naturally fit for marriage, they consider, according to the norms and conjectures of their investigations, would, through hereditary transmission, bring forth defective offspring.…” To no one’s surprise, Pius’ condemnation of eugenics drew responses from the eugenics movement, which failed to deliver a substantive critique of Church teaching and instead proceeded to predictably question the encyclical’s authority, raising the possibility (in the minds of those soft on eugenics) that Pius’ teaching may have overreached rather than bound Catholics by the weight of his Office.6 Accusing the pontiff of hiding behind papal pedagogy to mask his own “defiant medievalism” and “condemning many a woman to die in the hopeless agonies of childbirth,” American eugenicists like Margaret Sanger also used their rhetoric to re-ignite conspiracy theories about Romanism in America.

The eugenics movement had indeed found a formidable enemy in the Church. They had good reason to tremble. Catholic advocacy groups were well oiled and organized opponents. Clergy worthy of their cassocks rejected eugenics publicly and proved themselves loyal to mater ecclesiae. One of the most prominent Catholic social thinkers of this period, Rev. John A. Ryan, publicly described eugenics as a “pseudoscience” designed by “the immoral perversion of the human faculty,” and attacked contraception as the frustration of new life that “prevent it from attaining its natural end.”7 Ryan also wisely observed the implications of subordinating “the weaker groups to the welfare of society,” which would become “instruments to other human beings,”8 perfectly echoing Chesterton’s sentiments about eugenics breeding wage-slaves for “docility” and fostering “enterprise in a few masters.”9

Although Casti Connubii warned against the State’s tampering with “the integrity of the body,” and Chesterton feared that eugenics would lead to the leviathan State, Julian Huxley—whose paternal grandfather Thomas Henry enjoyed a friendship with Charles Darwin—did not mince words about government’s enforcement of eugenics. “In one or two centuries… we shall tell the man who can’t provide for himself and his family that he cannot have State aid unless he agrees not to have any more children.”10

Twenty-six years after Margaret Sanger rebranded her American Birth Control League into the “innocuous” Planned Parenthood, Pope Paul VI’s encyclical Humanae Vitae precipitated a storm of dissent. Its promulgation against artificial contraception was met with opposition by self-proclaimed pragmatists who turned their backs on marriage, the poor, the elderly, and the handicapped. In hindsight, however, Paul was proven right. As the encyclical predicted, men and women today are objectified, the marital act has been separated from marriage and procreation, and our posterity continues to be systematically extinguished by our culture’s cheapening of human life.

“Dying with dignity” is only the latest consequence of society’s rejection of birth, a “different consideration of life and personal dignity,” according to Benedict XVI, “based on individual desire and individual rights.”11 Or, as St. John Paul II put it, a trading of authentic liberty for “a notion of freedom which exalts the isolated individual in an absolute way,”12 as man judges his value by his ability to satisfy himself, his state of life becomes the measuring rod for his existence, and others judge him by his utility to society rather than his intrinsic worth.

Chesterton closes Eugenics and Other Evils with the irony that eugenicists, “naturally fearing they might be deficient… [are] so truly scientific as to have resort to specialists.”

Today, as scientism reemerges in its quest to dominate nature and cater to man’s appetites, may we tremble before the Blessed Sacrament and pray Our Lord’s swift justice prevail upon the hearts (and minds) of us all, because “Earth is not heaven, but the nearest we can get to heaven ought not to look like hell.” 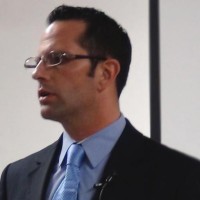