The Times of September 18th, 1920, had a paragraph entitled “Human Machinery: Aid for St. Mary’s Scheme. By our Medical Correspondent.”

Amongst the many marvellous things it said or assumed may be selected the following:-

“It is proposed to train doctors in the care of the human machinery much as engineers are trained to look after the machinery in factories. The result will be a department having the welfare and health of our working community as its special care. America has now six separate chairs on this subject, which is assuredly destined to an important place in industrial development.” (p. 5, col. 4.)

If the “working community” had the will and wealth to read the Times we would ask its editor why the present labour unrest should be still more justified than it is by a paragraph of such brutality or futility. This medical correspondent, whoever he is, has such a hereditary or acquired lack of humour and humility that he is a danger even to the Times. Does neither he nor the editor see the grim antinomy between their materialism and St. Mary, whose name is quite unconsciously dragged in the mud?

I take it that the principle is not only true, but self-evident. Examples abound for the conviction of those who see neither the self-evidence nor the truth of the principle. Thus the law of gravity, which is almost a cosmic generalisation, will account for much. But if we were to state the falling of rain (which is due to a thousand other forces) in terms of gravity, we should be doing an injury to the rain. Again, Freud had found in his Austrian psychological laboratory that a great deal of the activities brought under his notice were sexual. But when he expressed all human emotion and activity in terms of sexual activity he disproved himself either a psychologist or a philosopher.

It is quite clear to thinkers that no attempts to express the chemical in terms of the mechanical will approve a man either a mathematician or a chemist. Nor is it sound thinking but intellectual charlatanism to express the phenomenon of life as functions of matter. And Sir Bertram Windle has lately drawn our attention to the fact that as regards the possibility of life being a form of material energy, it is the biologists who affirm it, and the natural scientists who deny it!

These principles and facts were becoming so undeniable to the few men with leisure and mind to think that there was chance of the intellectual quarrels of two centuries coming to an end in an armistice, the preliminary of intellectual peace. But there is a danger that industrialism, which has degraded qualitative production into quantitative, and has substituted token wealth for real wealth, may arrest the crystallisation of peace by seeing everything in the artificial light of the factory and by stating even human activity in terms of a machine. If this abomination of desolation ever comes to pass industrialism will have swung full circle. It began, with its unit of horse-power, by stating machines in terms of vital energy, and it will end by stating the energy of a man in terms of a machine.

It is a subject of great thankfulness to those who are not “captains of industry” that Nature still begets human beings with the same wilfulness that made Shakespeare a child, not of London but of Stratford-on-Avon, and not of Tudor, but of village blood. No arrangement of molecules has ever given us a genius made to order. Before man is born Nature is so subtle that we do not know what man will be, and after he is born his will is so free that we do not know what he will do. We should merely give our ignorance a cloak and a name by calling this incalculable being a machine.

True, he has some sequences which are calculable because inevitable. If you starve him or shoot him he will die. If you overwork him he will waste and ail. If you overcrowd him in sunless smoke-skied factory towns his offspring will be fewer and weaker. Moreover, if you deprive him of all property, if you take him away from a home and a homestead, he will, as a rule, be powerless to bargain as one freeman can bargain or barter with another. He is free. Yet because even freedom has its necessities it is on these necessities that are based the elaborate industrial gradings of man as a machine. The sequences of the strange being can be tabulated with a practical accuracy that enables a modern captain of industry to calculate those chances of serious accidents to his workers that are due to the workers’ inattention.

Yet, after all, this being whose sequences have a limited inevitableness which can be the basis of a science, is yet so united by these sequences that he is free, with a freedom with which no machine is free. This is the drama of the man. He is called by the Greek philosophers a rational animal, not because he is always rational, nor even because he is always rational when he ought to be, but because he can be rational when he likes. But usually what can be, can also not be. Free will is no more common than free won’t. “Our working community” sometimes won’t work. It is in this that man differs from a machine. If a machine wall not work it is because it cannot work. (Here the English future with “will” is ambiguous. A machine has no will and no will not; but only can and cannot.) On the other hand, if a man will not work, it is not always because he cannot work; but, with all grammatical accuracy, because he will not work. Perhaps he refuses to work because the high wages he earns do not, though they ought to, satisfy him. Perhaps the wages are all right, but work has got on his nerves, or he wants to get drunk to forget being jilted, or he wants to have a bit of his own back from the “boss,” or he wants to back up the cleaners in the shed, or there is a wedding in the family, or any of the ten thousand psychological “jams” that never trouble the interior of an AI machine.

So he is not, never has been, never will be a machine. You cannot express him in terms of a collection of cranks and levers. Nor can he be cared for as “engineers look after machines in factories.” The only man who knows him best is not a captain of industry, nor a politician, nor even a doctor, but a priest. Yet even the priest does not know man all or well. But at least he does not degrade man by calling him a machine or even a body. Thus he does not express what is primary in terms of what is secondary. Indeed, he dares to express the secondary in terms of what is primary-the lower in terms of the higher-a promise in terms of its fulfilment—the finite in terms of the Infinite-when he calls even the body of man “the temple of the Holy Ghost.” 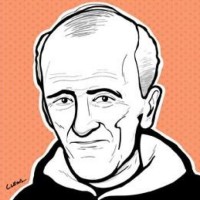 Fr. Vincent McNabb
Father McNabb was born in 1868 in Portaferry, County Down, Ireland. On November 10, 1885, he joined the novitiate of the English Dominicans at Woodchester in Gloucestershire. He often spoke in Hyde Park for the Catholic Evidence Guild, was a supporter of the Guild of St. Joseph and St. Dominic, and Fr. McNabb authored about thirty books in his lifetime, including Nazareth or Social Chaos, The Church and the Land, and Old Principles and the New Order.

In present days, they call us “resources.” Not much of an improvement over “machinery.”