The Mind in Chains

For the first half of our controversial career, we devoted ourselves largely to proving that Capitalism already had all the vices of Communism. For the second half, we shall probably have to devote ourselves to proving that Communism would have all the vices of Capitalism. For this purpose any report, and especially a reasonably respectful report, of the actual talk among the sincere Communists is very valuable. We published recently an article containing such an account of the real English Communists, by a writer who, if he did not entirely regard them with respect, had the courage to confess that he regarded them with fear. And the matters which he specially mentioned do, as it happens, exactly illustrate the point mentioned above; and why, while I might regard many individual Communists with respect, I should still regard Communism with contempt, even if it came to be universally respected; I might fear it, but I would never respect it.

And the reason is roughly as stated; that it bears so dreary and dirty a resemblance to ordinary Capitalism; that it is as flat and vulgar and wearisome as the worst sort of Capitalism; and above all, that it is narrow; narrow with that commonplace concentration produced by the division of labour, and the boast about the hundred slaves who labour to make a pin. It never seems to have tried to imagine what a man is like; let alone what a free man is like.

I will take only one typical case from the typical conversations, quoted by the contributor in question. He asked his Bolshevist friend why it was necessary to connect this particular economic Utopia with a wild attack on all religion. This has often been asked; and the answer always amounts to this: “Because the minds of the people must be directed towards the social work of the revolution, and must not be diverted to another object.” Merely for the pleasure of being flippant in such very solemn company, I may say that when I look at their long faces, and listen to their long words, my mind is very much diverted indeed; in truth I have seldom come across people so diverting. But what, especially, they do not seem to understand, is that the mind is always diverted; if it is a free mind; that is, if it is a mind at all. A complete human being does not ‘direct’ his mind to the single subject of improving the electric tractor for the Pinsk district; and take care not to ‘divert’ any of it to the beauty of the Pinsk landscape, or the funny faces of the Pinsk state officials, or the fear of death, or the beauty of woman, or the mystery of why man was made. He does not dam up these natural channels of thought, and force all the thoughts into the channel of improving the already improved economic system; even if he really thinks it is an improvement. And certainly he is not such an ass as to suppose that men can go on thinking indefinitely on the one subject of something that they are supposed to have done already.

All men are to have equal incomes, in order that all men may go on thinking about how they may give each other equal incomes; or perhaps more equal incomes. All men are to have State salaries, that their minds may be tilled day and night, up to the very hour of death, with the thought of how very urgent and essential it is that they should all have State salaries. Not for one instant must their attention slip, towards the question of what the State is or what the man is, or why either of them should exist at all. Communism does in all solemnity fulfill the comic suggestion in Jerome’s burlesque “Utopia”;1 that every person will have a vote and will look forward to the great day when every person will have two votes.

It is obvious, on the face of it, that those who talk in this way are torturing and chaining the mind, more than anything in the past ever tortured or enchained the body. The mind, the microcosm, the many-sided fullness of the intelligence and imagination; ‘these thoughts that wander through eternity,’ as Belial beautifully observed—these are to be chained in a lower pit and tormented by duller devils than Belial.2 Dante, being a deeper thinker than Milton,3 said that the worst punishment of the demons was that they were unable to philosophise. No man can philosophise, if he must ‘direct’ his thoughts to the Communist State and must not ‘divert’ them to the Cosmos. The whole nightmare of nonsense seems like a queer parody of the old mystic idea; that the active life is only a means to the contemplative life. In this system, living the active life is only a means to contemplating the active life. We do things only in order to have time to think that we are doing them; but never to think of why we are doing them.

Now that stupefying stupidity is itself the very stalest copy of the very stupidest Capitalism. That is exactly what was wrong, though never perhaps quite so wrong, in the Victorian worship of mere commercial bustle and activity. Matthew Arnold called it the Puritan or Philistine faith in machinery;4 but he was not talking of the comparatively trivial and technical dispute about steam-ploughs or spinning-jennies. He meant, as he said, that the Victorians who rejoiced in trade or money or prosperity or population were rejoicing in machinery; that is in the means and not the end. The end is the right sort of human happiness; and it cannot be enjoyed by commercial Puritans with a broad empire and a narrow mind; nor can be enjoyed by an economic fatalist with a broad empire and a narrow mind. The case against the ideal industry of the Bolshevist proletarian is exactly like the case against the ideal industry of the old American millionaire; both are idealised because they worked in blinkers and died most emphatically in harness; without having had a moment to think of what they were doing or why they were doing it. Both boast in exactly the same way of their ‘sacrifices’; that is of the dehumanised dryness of their own dusty souls; the millionaire bragging of having given up wine or tobacco and the proletarian bragging of having given up religion and romance. But they know not what they do, nor even why they don’t; and they never until they begin at the beginning and consider the question of religion.

There were several other aspects of the arguments quoted about which it would be interesting to argue. It would be extremely interesting, for instance, to analyse the assumption (confessed in all the Communist arguments) that the men they were speaking to were servants, and could never be anything but servants; and that the best they could hope for was security of service; which is servility. The point of the testimony to the very influence and impressiveness of the best Bolshevist talkers, was that they talked only of making a man safe in his job, and not in his life or liberty or possessions. It is thought possible to rush Communism onto the stage immediately after the collapse of Capitalism; precisely because those who have been trained in the one have been trained for the other. 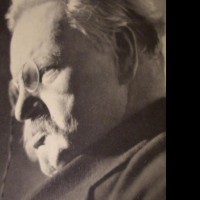