Quiz time! I will list some characteristics of American society and you tell me what decade I’m talking about.

In what decade were a very vocal group of Americans advocating,

If reading Orestes Brownson has taught me anything, it’s that America has always been a little nuts. And our current problems are simply the problems of the 1820s—or earlier.

Indeed, in philosophy the problems can at least be traced back to the subjectivism of Immanuel Kant, who lived in the 1700s, or Renee Descartes, who lived in the 1600s—and certainly (according to Orestes Brownson) to the Reformation, which began in the 1500s.

Modern infidelity, says Brownson, is the logical consequence of Protestantism, which abrogated external authority in favor of an entirely internal authority, which is mere subjectivism.

Voltaire and D’Holbach did but continue Luther and Calvin, and their incredulity was but an accident in their lives.

… an accident which sprang from the underlying principles of the Protestant worldview.

Brownson makes a very good case that the Protestant revolt against the authority of the Catholic Church would ultimately and inevitably lead to what we now call the “dictatorship of relativism”, to the end of sane philosophy, and to the failed utopian experiments of the Transcendentalists and their socialist and communist ilk. Indeed, this intellectual capacity to follow an implication to its explicit conclusion, to follow an assumption to its consequence, to follow an axiom to everything that axiom ultimately leads to logically is the primary hallmark of Brownson’s thinking. He was consistent—consistent in accepting the consequences of his beliefs, of bravely following the road to wherever it led.

“My countrymen,” wrote Brownson, “did not understand me.”

[They] did not understand me, because they were not in the habit of generalizing their own views, and testing them by the light of first principles. …  They could defend with equal earnestness perfect equality in theory, and the grossest inequality in practice, and call it common-sense.  I could not do that. … Alas ! I did not know then that men act from habit, prejudice, routine, passion, caprice, rather than from reason; and that, of all people in the world, Englishmen and Americans are the least disturbed by incongruities, inconsistencies, inconsequences, and anomalies—although I was beginning to suspect it.

Thus the inconstant world called him inconsistent, flighty, a maverick, a crank—always changing with the wind, even though, despite his outward shifts he maintained a heroic devotion to seeking the truth.

The inner devotion to truth and to consistency of thinking were not easy for his readers to see, for Brownson, over the course of his life and writings (he lived from 1803-1876), went from Presbyterianism to Universalism to Unitariansim to a kind of pragmatic Agnosticism, and finally to the Catholic Church. He remained Catholic for the last thirty-plus years of his life. He tells the story of his conversion in 350 pages in The Convert, a tale of intellectual and spiritual development which I will adapt in my portrayal of Brownson at the Portsmouth Institute Conference and on EWTN’s The Journey Home this summer.

And through it all, Brownson—though spiritually confused at times—was ever constant in his pursuit of the truth. And also strikingly constant in his Distributism. And, though what Brownson advocated long before his conversion and long before the Social Encyclicals of our modern pontiffs was not called “Distributism” by him, that’s exactly what it was, a vision of economic reform that saw the horrors of Wage Slavery as worse than the horrors of “Negro slavery”.

To remedy these [economic and social] evils, I proposed to abolish the distinction between capitalists and laborers, employer and employed, by having every man an owner of the funds as well as the labor of production, and thus making it possible for every man to labor on a capital of his own, and to receive according to his works. … It was wherefore I opposed the whole banking and credit system, and struggled hard to separate the fiscal concerns of the government from the moneyed interests of the country, and to abolish paper currency. I wished to check commerce, to destroy speculation, and for the factory system, which we were enacting tariffs to protect and build up, to restore the old system of real home industry. The business men of the country saw as clearly as I did whither my propositions tended, and took the alarm; and as the business interests, rather than the agricultural and mechanical interests, ruled the minds of my countrymen, I had my labor for my pains.

But Brownson himself seemed to feel that his primary contribution to society was not his social activism, his agitation for the rights of Labor, or his advocation of Distributism, but a philosophy that he coined, a kind of Natural Philosophy that recognized the Supernatural, that he felt would very much aid non-believers in converting to the Catholic Faith.

It was a philosophy of perception, a kind of epistemology that was inspired by the French philosophers of his day, and it was based upon the most fundamentally sane act of the mind—the leap of faith that accepts the reality of things. G.K. Chesterton was later to say, “It is a rational position to deny the stones in the street; it will be a religious dogma to assert them.”

Brownson asserted them. He accepted the reality of the stones in the street—the objective existence of the Object. For Brownson, it was not so much “I think, therefore I am”, but “I am; and It is, and if I am thinking, then both I and It are somehow in Communion.”

From Browsnon’s frustrations as a Transcendentalist Social Reformer, came the realization that to change the world, one needs a lever big enough to move it; to change man, one needs a lever that is even bigger; and in both cases, one needs a position of immobility to cause mobility—you can’t move something if you have nowhere immobile to plant your feet. For Brownson, that solid ground, that place to plant his feet, that rock, was first a Supernatural position outside of Nature, and ultimately the Catholic Church, God’s established Supernatural authority on earth—but before Brownson saw this supernatural truth, he saw, on a natural level, that this same solid ground he sought was the participation in Being that both he and the world around him shared.

For if the Subject can commune with the Object when perceiving it and thinking about it, then what happens when that Object is God Himself? Does not this imply that God can implant in each of us something Divine, which is not only reason itself and the very light that enables the Subject to see the Object, but that He can in fact give us “grace”—this very “grace”, which Protestants deride as at best saving us in an exterior way, without (in the Protestant view) entering into us really or substantially?

Brownson’s struggles with the Christian Faith all of his life before his conversion stem from this mistaken Protestant notion that nothing in man can truly correspond to God, that grace is a kind of medium of exchange that purchases us our freedom, and that reason is wholly debased, that faith and reason are necessarily in opposition to one another, that to accept faith is to deny reason—that no true Communion between God and man—or between reason and faith—can exist, that grace can not become part of our nature.

But Brownson’s new philosophy showed him something quite different.  It showed him …

… God as superior to humanity, independent of nature, and intervening as Providence in human affairs, and giving us, so to speak, more of himself, than he gives in nature. Here, though still far enough from the truth, I had entered into the order of religious ideas, and was headed, for the first time in my life, in the direction of real Christian beliefs, and began to suspect that I might believe as the Christian world had always believed, without abandoning my reason, or doing it the least violence. This filled me with an inexpressible joy. I need not always stand alone, and pine in vain for sympathy with my kind. I, too, may one day enter the brotherhood of believers.

Brownson recognized that his new philosophy was not the fullness of Catholic Faith, but that it could lead a thinking man away from the errors of his age, and guide him to the doorstep of the Church.

Orestes Brownson, then, stands as an intellectual beacon in the social and literary history of the United States. He is, in many ways, the American version of Blessed John Henry Newman, though the American milieu made Brownson a very different sort of figure. And Brownson’s conversion did not have the impact in the States that Newman’s did in England and in Europe.  For one thing, no specifically American Catholic Literary Revival grew from the conversion of Brownson as did, ultimately, the worldwide Catholic Literary Revival from the conversion of Newman.

For example, one thinks of Mark Twain, perhaps the greatest figure in American Literature in all of the 19th century. Twain’s profound and lifelong sadness, which fueled much of his sarcasm and his humor, grew, to a large extent, from the oppressive and heartless Protestantism in which he was raised. Twain’s poetic soul longed for religious truth, and spurned the idea that such truth could ever be found—and yet he had a great love for St. Joan of Arc and a great sense of the potential beatitude that Original Sin obscured. Had Mark Twain, born a generation after Orestes Brownson, been influenced by Brownson’s mind and had followed Brownson’s intellectual path of development, all of American life and literature might today be very different from what it was. Mark Twain the Catholic would have been the G.K. Chesterton of America.

For we are simply reaping what our great-great-grandparents have sown. 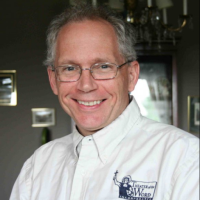 The Market As the Capitalist Demiurge
February 27, 2017

Yeah, the jingles are fun. Today, we heard “Yankee Doodle Dandy” and I could have sworn another train was playing the first few notes from “My Country Tis of The” but Brooke thinks I’m nuts. Super Rapid Express Onward!