“The trouble with Labor,” said David (Hennessy), as he poised himself on the ladder outside the kitchen window, talking to me at the kitchen sink inside, “is that it is forced to fight for the same thing it is fighting against. It is fighting for money, when what it should be fighting for is property. That is the big fight today,—money versus property. Industrial capitalism tends to be bigger and bigger monopolies, ‘interlocking directorates’ the Popes have said; and the unions right now are certainly under water, all but drowning. They are really fighting for their lives, just for the right to exist, and that doesn’t leave much time or energy to formulate aims and purposes aside from wages and hours. And the higher the wages, the higher the prices. Property’s the thing. The Popes have said that as many as possible should become owners. They said to deproletarize the workers.”

David is always worth listening to on these subjects but our conversations must of necessity be elliptical and disjointed what with swing shifts, hours of work, his duties on his four acres and with his wife and six children (and another on the way).

That day his work was from seven to four, and he had time before supper to screen in the kitchen windows. As he stood on the ladder outside the kitchen window, the baby goat nibbled delicately at the leaves of the little peach tree, the six ducks made an exploratory procession through the garden back of him, and Margaret and Mary Elizabeth, (Maggie and Liz to their father) climbed up the ladder by his side to hand him tacks. Maggie is not yet two and Elizabeth is not yet four. I, the grandmother, have nervous prostration watching them on ladders and high up in the mulberry trees. Another argument for early marriages. You can take it better.

David is worth listening to, because he works for a subsidiary of one of the greatest monopolies, and is a member of a union which competes with still another union for the membership of the workers, the International Mine Mill and Smelter Workers, and at the same time he lives on four acres (and yet in the city too) and has wife and children, goats, chickens, ducks and geese, not to speak of turtles and chipmunks, rabbits and parakeets and other live things. He is scholar and worker, and in the latter capacity earns his living by the sweat of his brow, and in the former, runs his mail order bookshop whose ads we carry every month, and whose books illustrate the ideas we are always talking about in The Catholic Worker, for a “new society to be built here and now, within the shell of the old.”1

“The two great sins against increase, according to the teaching of Thomas Aquinas, are usury and sodomy,” he went on, taking some tacks from Lizzie’s outstretched palm. “And one is apt to lead to the other. Take those men at the factory. They are trying hard to become owners, and after years of steady hard work in that plant are trying to buy their own homes. You should hear them talk about their gardens and the drought! The older ones bought older houses with more space around them. But the younger ones are buying these new houses which cost fourteen thousand dollars, and after a good down payment take thirty years to pay off. By the time they get through paying the interest and the installment on the mortgage, they will have paid $33,000 for those same houses, and by thirty years, the houses will have fallen apart. And there is not enough room in them for an increase in the family either, and so that is where sodomy comes in, an ugly word but the saints of the church didn’t mince their words. Sodomy is birth control, according to church teaching.”

David’s job is in a foundry where waste metals are smelted in furnaces, and ingots of copper, brass, lead and zinc are turned out. It is a basic industry since metal is to industry as food is to the body. The work is hard and about 400 are employed not counting the office force.

“Industrialism can’t give man the three basic necessities, food, clothing and shelter.” David went on. “For instance mass production can make frigidaires, but not the food to go in them. Of course people can argue that we do have factories in the fields and we do have mass production of food. But all rural-lifers who are working for the family farm can tell you that such mass production does not produce as much per acre as smaller units and the soil is depleted and poisoned and the health of the whole population lowered. Under industrialism the world is starving and the vitamin factories are flourishing….”

And about clothes! Under the Jewish law, and the Christian too for that matter, organic material is supposed to be used; wool, cotton, linen, not mixed, nor an imitation of these.

“Eric Gill has written about clothes. And about money too. His book Money and Morals has chapters in it on the politics of industrialism and unemployment. Newman Book Shop put out a good pamphlet on money recently by Fr. G. Jansen, O.P. called Money is Sterile. Then there is The Cross of Gold by H.D.C. Pepler, and Financial Justice by J.F.L. Bray, an Aquinas Paper published by Blackfriars. I’ve got them in my list. Two new books came in today, Home Made Homes by Ronald Duncan, who is a Ruralist and a Gandhian, too. He wrote a book on Gandhi before his death. The other is From the Waste Land, by Edward Hyams, a socialist but he preaches agriculture, craftmanship and religion. They all go together. Of course Bede Griffith’s book, The Golden String brings all these things out best of all.”

David got down from his ladder and with the help of Eric and Nickie moved on to another window, which happened to be behind a large frigidaire which all but cut out light and air! So our conversation was interrupted.

But such conversations, just as such articles as this, must of necessity be suggestive and provocative, and to learn more, there are always the books! 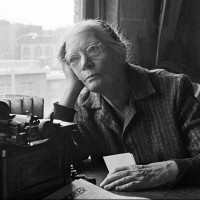